All About Animal Glue

How Is Animal Glue Made?

Animal glues (also known as hide glue, and protein glue) are made through prolonged boiling of pure bovine or porcine animal hides, connective tissues, and bones. 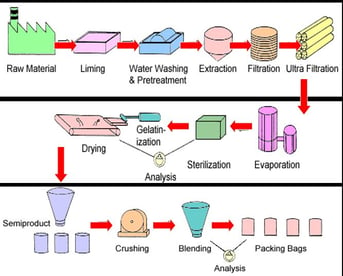 Our ingredients guarantee our hide glue products to be 100% non-toxic, environmentally friendly, biodegradable and 100% recyclable.

Viscosity (visc.) is the flow characteristics of the glue in liquid form.  This is typically measured in centipoise (cps.) or millipascal seconds. Here is a list of common household products and their corresponding viscosities:

As the viscosity increases so does the "thickness" of the liquid. This same concept applies to glue. Ideally, 120 viscosity will produce a bloom of 360 and therefore would be considered a 120 visc. / 360 gram glue.

Sometimes glues of different viscosity and gram strength are blended together to achieve different properties.  This would be accomplished by physically blending two or more glues in the dehydrated form until uniformly distributed in the mixture. Doing this during the manufacturing process allows for consistent viscosity and gram strength parameters when heated and melted prior to usage.

+ Produced from bovine or porcine bones.
+ Typically has a low viscosity and gram strength.  Viscosity less than 60 centipoise, gram strength less than 200.
+ Has a larger particle size than hide glue and sometimes needs to be ground.
+ Usually harder and more brittle than hide glue.
+ Can have a stronger odor compared to hide glue due to the presence of sulfur.

Animal glue is soluble in water and dissolves best in cold water to form a gel.  It is important to soak in cold water first to replenish the moisture it originally contained.  This presents the proper conditions for continuing with low heat application (140°F) to dissolve the glue thoroughly without damaging its properties.

This procedure establishes a uniform solution which can be applied to the desired material to be bonded.  Once cooled, an elastic gel is produced perfect for bonding purposes.  This property is thermally reversible with heat.