In Depth Look at Dyne Testing 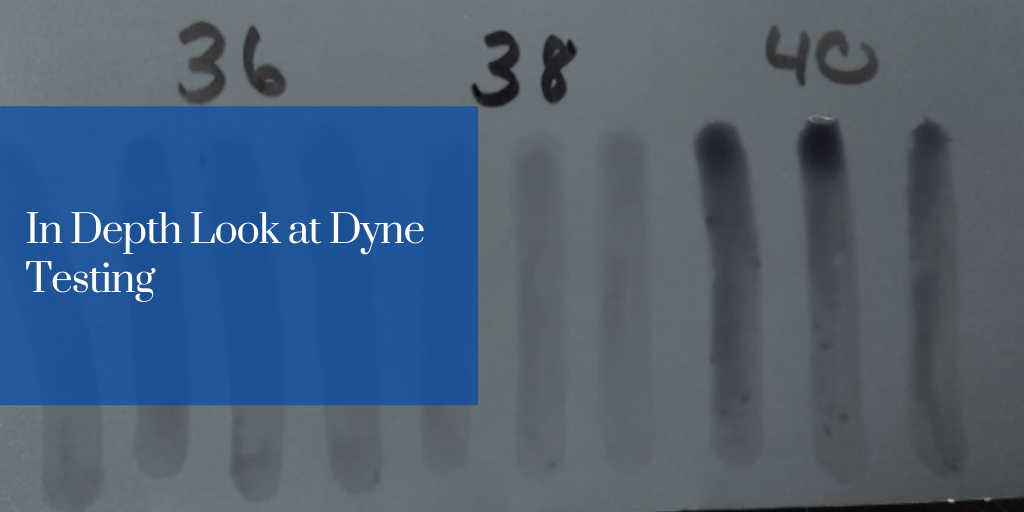 What are dyne pens? What is a dyne test? Why is this test important?

We get questions like these often, and in order to better explain this testing method we went right to the source.

We have discussed dyne testing in the past. In fact, one of our most highly read blog posts discusses how to perform a dyne test. But, of course, there is much more to discuss about dyne testing beyond how it relates to our gelatin glue applications.

Our on-site Laboratory team has been using ACCU DYNE TEST™ Marker Pens from Diversified Enterprises for many years.

ACCU DYNE TEST™ marker pens are used to measure the surface energy of films and other non-absorptive substrates. In general, the ability of a substrate to anchor inks, coatings, or adhesives is directly related to its surface energy. If the substrate surface energy does not significantly exceed the surface tension of the fluid which is to cover it, wetting will be impeded and a poor bond will result.

We had the opportunity to chat with Russ Smith, President of Diversified Enterprises, to learn more about dyne pens and dyne testing.

Can you tell us more about the history of dyne pens?

The earliest dyne pens were based on the "magic marker" design, utilizing a fibrous membrane to absorb the dyne solution, and a nib to transfer it to the surface of the test sample. Typically, they contained an alcohol and water formulation, with dye added for visibility. The most rudimentary go/no go dyne pens were formulated to permanently mark a material with a surface energy of 38 dynes/cm or higher, as this was the degree of wettability that most solvent-based inks required for good adhesion to polymers.

Why are dyne tests important? What do they tell us?

The dyne test is one of two widely utilized measures of surface treatment, which is applied to improve a material's wettability by increasing its surface energy (the other is the contact angle test). As such, it provides immediate feedback for anyone employing corona, flame, plasma, or similar treatment methods online. Without adequate surface treatment, most polymers will present major problems in printing, coating, laminating, and bonding operations. Depending on the materials and end-use demands, the surface energy required can range anywhere in dyne level from the low to mid 30s to as high as 72 dynes/cm (water-wettable).

Without knowing the surface energy of your substrate, it is not possible to produce consistent and reliable product. 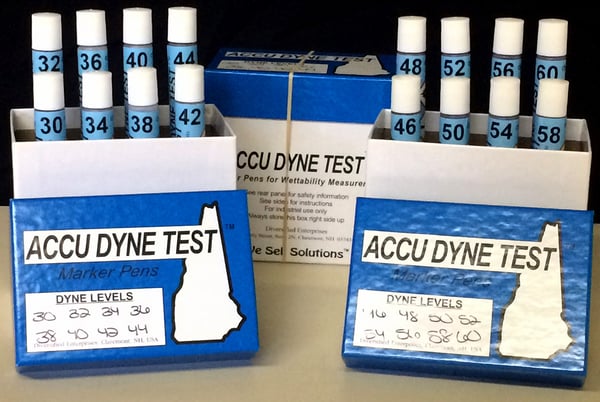 Can you provide a more detailed explanation of high energy versus low energy surfaces?

This is a question whose answer could fill a book, but here goes in a nutshell: Solids and liquids both have two components of surface energy - polar forces and dispersion forces. High energy surfaces tend to be more polar, and most liquids such as adhesives, coatings, and printing inks rely on their polar component for adhesion, as well as for thorough wetting of the surface.

What industries benefit from this type of testing?

The dyne test originated in the plastic converting and printing industries, for the reasons discussed above, in the late 1950's and early 1960's. Over the past 25 years or so, many other industries have discovered the value of this simple, inexpensive test, as it is a very good predictor of adhesive strength, print quality, coating consistency, etc. Some examples are automotive manufacturers, platers, medical device manufacturers, and PC board fabricators. Virtually any operation that requires a controlled and predictable liquid-solid interface can benefit from dyne testing.

What is the shelf life of a dyne pen? Proper storage?

Shelf life is an interesting and complex issue, as three factors affect it. These are: time, evaporation, and contamination.

We have an in-depth discussion on this topic in our online blog. Our best estimate of an overall safe shelf life is 6 months. Test markers should be stored at room temperature, and temperature cycling should be avoided.

The surface energy of roll stock and other substrates is also affected by aging and storage conditions, especially on materials that have been surface treated. In general, corona treatment is least durable, flame and atmospheric plasma treatments are more so, and traditional plasma methods provide the longest material shelf life.

What, if anything, is different between dyne markers and the pure liquid application?

ACCU DYNE TEST™ Marker Pens use the calibrated test solutions specified by ASTM D2578 and ISO 8296, so the interpretation and chemistry of the two methods is effectively the same. Moreover, our spring-loaded valve tips go a long way towards keeping the test fluid in the marker pen barrel free of contamination and protected from evaporation, so their long-term accuracy is not seriously affected. Felt-tipped dyne pens often use alternate formulations, so differences in results obtained from those products is not surprising. Additionally, the felt tip acts as a wick and can feed surface contaminants and surface-blooming additives back into the pen reservoir, so their long-term accuracy is less certain.

The one big difference between using bottled solutions applied with swabs vs. ACCU DYNE TEST™ Marker Pens is that the latter should not be used to test for the presence of oil on metallic surfaces - this can build up on the tip, which would permanently invalidate test results. Magic marker style dyne pens should never be used to test inadequately cleaned metals!

Why is the liquid purple? Are any other colors available?

A number of different dyes are used in surface tension test fluids. For years, Victoria Blue dye was the predominant color, and we used that until 2007, when inexplicable color changes started happening a bit too frequently. At that time, we researched a variety of other options, and found that Methyl Violet offered a good balance of color density and resistance to fade and hue shift. 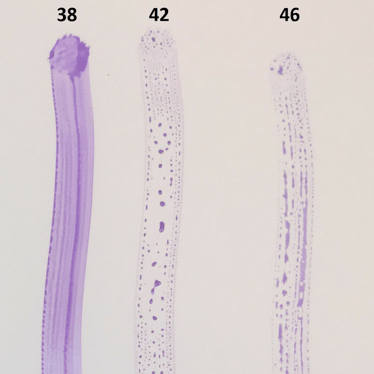 What ARe The Limitations of dyne testing on absorptive material? How can you measure surface energy effectively when the dyne ink absorbs?

Dyne testing really should not be done on materials that are at all absorptive at their critical surface tension (defined as the dyne level solution that takes just 2 seconds on the surface until it starts to reticulate into individual beads). The problem is that the absorption changes the formulation of the fluid at the same time that it is affecting the physical nature of the sample's surface. In some cases, marginally absorptive surfaces can be effectively monitored via the dyne test, but I do not personally recommend the practice.

The same considerations apply to any solubility between the test fluid and the substrate. Fortunately, most polymers are not soluble in the dyne solutions, with some acrylic formulations being the most notable exception.

What kind of technical assistance do You offer for dyne testing?

Dyne testing is simple, but it is an interpretive test, and every liquid - solid interface is unique. For that reason, we offer limited laboratory testing of customer samples at no charge. This enables us to determine the appropriate dyne level range, as well as identify any unusual characteristics of the sample surface which testers should consider as part of their normal protocol or troubleshooting efforts.

Additionally, during usual business hours, there is almost always someone in our office with extensive dyne testing experience. David Aitken, our Applications Manager, has been with us for well over 25 years, and I have been involved in this realm for longer than I care to admit! We're there to consult with you whenever needed.

In addition to assistance from the team at Diversified Enterprises, the LD Davis technical team offers in-house dyne testing (as it related to bonding with gelatin based glue) for our prospects and customers. This test is extremely helpful, especially when working with unique or difficult substrates.

A giant thank you to Russ Smith, of Diversified Enterprises, for taking the time to chat with us about dyne pens and the importance of dyne testing.