The Complete Glossary of Packaging Terminology 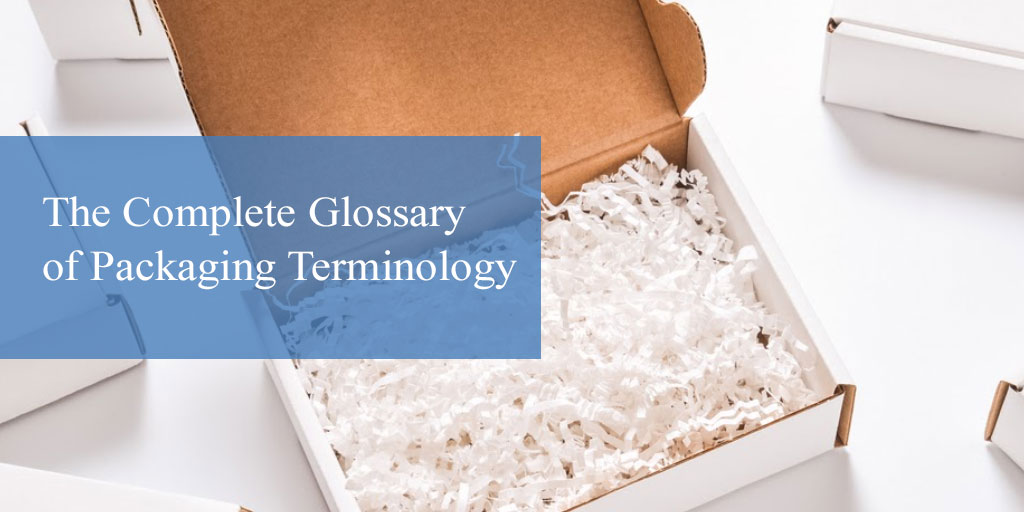 At first glance, a box looks pretty ordinary, but packaging plays an integral part in our everyday life. Ever have a difficult time communicating with your packaging designer? If you’ve ever felt a little foggy over technical terms, you’re not alone!

While there are circumstances where technical terms can’t be avoided, some jargon is pretty easy to understand or has an alternative.

We’ve broken down frequently used packaging terms to give you a guide to industry-specific phrases. Boost your knowledge about packaging to make your next packaging design a breeze.

ADHESION: The attachment of one material to another, primarily by molecular attraction.

ADHESIVE: A substance that can be used to join two surfaces. A typical adhesive is a liquid capable of forming molecular attraction to (wetting) the substrates and then solidifying by evaporation of volatiles, cooling, or chemical reaction.

AMBIENT: Describes common or prevailing uncontrolled atmospheric conditions. Ambient temperature, for example, would refer to a temperature in a typical room comfort range. A specimen tested at ambient conditions would have been tested at whatever the room conditions were that day.

BLANK: A piece of material from which a box or part will be made by further operation. A blank is any die-cut, scored, or otherwise partially prepared section of paper stock in the flat to be formed into a paper box in paperboard box manufacturing.

BLOCKING: An undesired adhesion between touching layers of material might occur under moderate pressure, the temperature during storage, or use.

CALIPER: The thickness of a material such as paper, film, and foil measured under specified conditions. This is also the term for the precision instrument used to measure the thickness.

CARDBOARD: A term erroneously used as a synonym for paperboard. It is not a recognized term in the paper industry. Still, it is used to denote a stiff, moderately thick paperboard and a general term for folding carton board, chipboard, corrugated board, and fiberboard.

CHIPBOARD: A low-quality paperboard made of recycled paper for use where specified strength or printing quality is not necessary. It may be a bending or non-bending grade. Chipboard is used for pads, dividers, backing sheets, and filler pieces.

CLAY-COATED BOARD: A bending paperboard, the top of which has been coated with a fine clay that evens and brightens the surface to produce a high-quality printing surface.

COHESION: The tendency of a mass to hold together. The internal bond strength due to the mutual attraction of molecules for one another within a material.

COHESIVE SEAL: A seal produced by an adhesive that adheres only to itself and requires only contact pressure to bond. Also known as a cold seal.

CREASE (noun): A line or mark made by folding any pliable material. (verb) To form a crease in a sheet of material, usually to provide a bending line.

CUT-SCORING RULE: A steel strip one edge of which is ground to the center or side face. Used for partially cutting through boxboard stock. For example, making a partial cut for the purpose of forming a fold line.

DIE: Any metal device that is used to cut or impart a shape to another material. For example, a steel-rule cutting die is used to cut paper or paperboard shapes from a press sheet.

DIE-CUT: Any operation in which a form that incorporates shape cutting edges is pressed into a substrate to cut out a designed shape.

DIMENSIONAL STABILITY: The ability of a material to retain its dimensional shape under a given processing or use condition.

DYNE LEVEL: A measure of surface energy. The dyne level will indicate whether a material’s surface will be receptive to forming a chemical bond with an adhesive coating or ink. Generally, in packaging, the dyne of a surface needs to be 37 dynes or higher, depending on the nature of the adhesive substance.

EQUILIBRIUM MOISTURE CONTENT: The moisture content of a substance at which it will neither gain nor lose moisture in an atmosphere having given relative humidity.

EQUILIBRIUM RELATIVE HUMIDITY: The humidity at which the moisture content of a material and the surrounding relative humidity are in equilibrium. The material will neither absorb moisture nor lose moisture to the air.

FORMATION: The evenness with which cellulose fibers are distributed in a finished paper. Short fibers flow out fairly evenly and produce a paper with good formation. Long fibers tend to tangle and flow out in clumps during papermaking. This results in an uneven distribution of fiber in the paper. The different fiber densities will affect paper properties such as density, tear strength, and ink absorption, to name just a few

GLUE: Although the term is frequently used to describe any sticky substance that can be used to join two surfaces, it most correctly refers to a protein-based substance derived from animal cartilage, bone, and skins.

GRAMMAGE: The weight in grams of 1 square meter of material. Grammage can be used to describe either a film or sheet or the rate of application of a liquid adhesive or coating.

HYGROSCOPIC MATERIAL: A material that will absorb moisture from the air. A hygroscopic material will reach an equilibrium point for a specific relative humidity, at which point moisture will neither be gained nor lost.

MECHANICAL ADHESION: A theory of adhesion that proposed that bonds are formed when liquid adhesive flows into irregularities and cavities in the material surface. When the adhesive solidifies, it becomes trapped and can no longer be removed.

OPACITY: The ability of a material to stop the transmittance of light.

OPEN TIME: The amount of time between when an adhesive is applied and when the substrates to be bonded are brought together.

PAPER AND PAPER BOARD: Sheet material produced by matting of fibers (usually cellulose) paper and paperboard are nonspecific terms or can be related to either material caliper (thickness) or grammage (weight). The International Standard Organization (ISO) states that material weighing more than 250 grams per square meter (51 pounds per 1,000 square feet) shall be known as paperboard. In U.S. practice, material over 300 micrometers (0.012 inch) thick is paperboard.

PHENOLIC: A thermoset plastic made by the reaction of phenol and formaldehyde. Phenol formaldehyde or phenolic plastics are also known by the trade name Bakelite.

POROSITY: A characteristic of a material that allows free passage of air or liquid.

SOLIDS CONTENT: The number of nonvolatile components remaining in an adhesive, ink, or other coating material after all volatiles are removed, expressed as a percentage of the original mixture.

SPECIFICATION: A document or set of documents detailing the exact dimensional, aesthetic, and functional requirements of each component in a packing system and the assembled system. The specification will also detail how the individual characteristics will be measured and list causes for rejection.

SCORE: To make an impression or a material cut in a flat material such as paperboard to facilitate bending, creasing, folding, or tearing.

STARCH-BASED ADHESIVE: An adhesive whose primary raw material is starch. Such adhesives may be simple starch and water blends or they may be heavily modified by being cooked with acids (dextrin Adhesives) or alkalis (jelly gums) or by the addition of other modifying ingredients or synthetic polymers.

SUBSTRATE: The material on which some action, such as printing, coating, adhesive bonding is being performed.

TACK: In adhesives, the amount of stickiness or pull resistance experienced when one attempts to separate two substrates while the adhesive is still in a viscous or fluid state. Tack also refers to comparable property in inks.

TACK RANGE: The period of time during which an adhesive will remain in a tacky condition after application to an adherent.

TOLERANCE: Permissible maximum and minimum deviation from the specified dimensions or qualities.

VISCOSITY: A measure of a fluid’s resistance to flow. Water would be classed as a low-viscosity fluid, while syrup would have a high viscosity.

WET-BOND LAMINATING: A laminating process in which an applied adhesive, including any volatile solvents or ingredients, is pressed between the two substrates to be laminated. Since the adhesive still contains volatiles that must be allowed to escape, at least one of the laminate materials must be porous.

Knowledge is a critical factor when it comes to empowering your team. Our adhesive experts are committed to helping customers improve their manufacturing process through renewable glues. Smarter packaging design is central to the growing focus on sustainability.